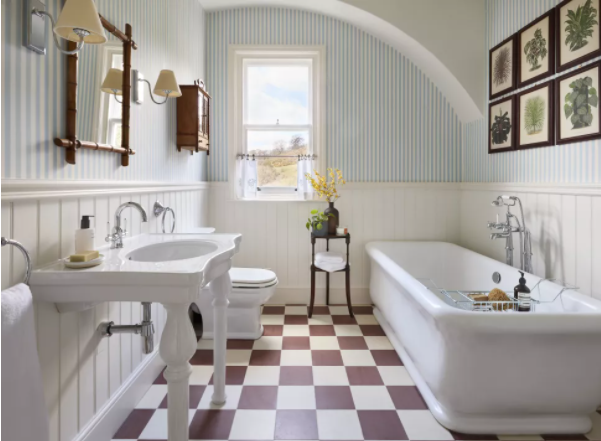 Undoubtedly, the confusion, voluntary or not, between bathroom and bathroom constitutes an intellectual scam. Because if the first is old and is seen reduced to the minimal portion, the second implies a minimum of space and equipment. Let’s not mix tea towels and napkins, please.

And let’s see how a water point and its rustic sink have become one of the essential parts of modern living.

Let’s quickly go over the etymology of the word “bath”, directly derived from the Latin balneum which, in ancient Rome, described both the thermal baths and the room reserved for ablutions in the domus.

And let’s cross the centuries in search of the bathrooms of our ancestors, avoiding, for lack of space, the public baths with their specific history.

Traces of bathrooms can be found as early as the third millennium BC. Most often used religiously (John the Baptist did not invent anything, my brothers), the bath purifies the soul and the body; which did not prevent ordinary people from taking a bath to… wash themselves.

But from there to dedicate a room to this use, it was still necessary to have the means. However, vestiges of it have been found in what is now Pakistan, in Mohenjo-Daro!

As well as in Crete (Palace of Knossos, 1700 BC), with a plumbing system extremely similar to the one we know today; or even in Santorini thanks to the hot water provided by the volcanic geothermal energy of the place.

In short, in Greece, among the rich, we already have a bathroom. Soon imitated by the Roman patricians who spread their domestic architectural ideas throughout the Empire.

At the start of the 20th century, only bourgeois apartments had a washroom and, even more rarely, a bathroom equipped with a tub (zinc, enamelled sheet metal or even copper basin) but people washed there in shirt.

The little people, they are satisfied with a shower, at best, while the peasants scour themselves in a vulgar tub of more or less hot water in the middle of the courtyard.

Of course, running water is gradually arriving in city buildings, but only on the ground floor in the absence of efficient pumps.

The modern bathroom comes to us from England and then from the United States, popularized by the rise of the bathtub because I remind you that the bathroom is the room where you take a bath! So there needs to be a…bathtub